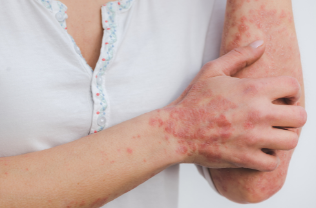 In the skin areas affected by psoriasis, due to the tumultuous development of keratinocytes, raised, bright red plaques are formed, covered with whitish scales. This skin disorder, which is very common, can appear at any age and affect any part of the skin, including the nails.

The most affected sites are:

What are the symptoms of psoriasis?

Psoriasis manifests itself in various forms. The main ones are:

PLATED: This is the most common form. The typical lesion is a well-demarcated, erythematous plaque covered with silvery scaling.

Individual plaques may vary in diameter and may converge with each other to cover entire body areas.

GUTTATA: This form occurs, in young subjects, after a streptococcal infection, usually tonsillar.

Papules of 1 mm to 1 cm in diameter appear on the skin, scattered mainly on the trunk, with a raindrop-like appearance. Typically 10 to 15 days before the eruption, the patient has had an episode of streptococcal pharyngotonsillitis.

PUSTULOSIS: It can be localized or generalized. The localized form occurs preferentially in the palmar and plantar sites. In this case, small vesicles appear in the stratum corneum of the epidermis, which superficialize by desquamating. In the most violent forms, signs of erythema, hyperkeratosis, and fissures appear. Pustular palmoplantar psoriasis is often confused with other forms with similar manifestation, such as dyshidrosis, contact dermatitis, irritative dermatitis. In contrast, the generalized pustular form is a severe form of psoriasis, which fortunately is rarely observed.

AMIANTACEA: This is a form that occurs only on the scalp. It is also called tinea amiantacea or pityriasis amiantacea. It is usually a juvenile form that is only sometimes seen in the elderly. A thick layer of whitish, helmet-shaped scales forms, involving the entire scalp.

ERYTHRODERMIC: This is a severe form of psoriasis, in which the entire skin area becomes erythematous and scaling. Sometimes the skin becomes exudating, there is heat loss with metabolic imbalance, and the patient must be hospitalized for therapeutic support. This form can be induced by medications, stress, coexisting diseases.

What are the causes of psoriasis?

There is no cause that can be uniquely associated with psoriasis; certain events can contribute to triggering it in people who are already predisposed, including:

Stress: stress is universally considered a trigger for psoriasis, particularly in individuals with an aptitude to somatize at the skin level. Since stress is very common today, it is the main trigger.

Trauma: psoriasis often arises after a trauma such as a car accident, a bone fracture, a particularly debilitating surgery. In these cases, it is unclear whether it is the trauma that induces psoriasis, or the resulting psychological stress, or both.

Streptococcal infections: these are the cause of psoriasis in the guttate form, but can aggravate other forms of psoriasis as well.

Drugs: some drugs including beta blockers, lithium, gold salts, and synthetic antimalarials are considered to be inducers of psoriasis or capable of exacerbating psoriasis already in place. Systemic corticosteroids given for other diseases can also cause psoriasis to appear or, psoriasis is exacerbated upon corticosteroid administration.

Normally, psoriasis is diagnosed by the doctor or the specialist who decides the most appropriate treatment according to the various forms.

In some cases the pharmacological therapies are essential and must be timely, especially when the affected skin areas are very large with the risk of serious psychological and physical complications or when there is also a joint involvement that can lead to severe pain up to immobility. Unfortunately, there are many cases in which drug therapy does not produce the desired results or serious side effects occur that lead to the suspension of treatment.

There is also a correlation between psoriasis and metabolic disorders. As we said, psoriasis is an autoimmune disease characterized by a high degree of systemic inflammation. To counteract and

Save products on your wishlist to buy them later or share with your friends.

No account? Create one here
Product added to wishlist